This is the year for karate birthday parties!  Have you been to one?  They’re fun to watch, the kids are so cute, and everyone has a great time!

Micah went to his first karate bday party several months ago.  It was held at a Martial Arts school in Castro Valley.  At the party, each kid was given a headband to wear and the birthday kid was an honorary black belt for the day.  So fun!  The teachers had the kids run around (a lot!), practice some punches, and wrestle with one another.  The school also provided the pizza, drinks and some packages even included a cake.  The last demonstration was watching the kids break a wooden board, either by kicking it or breaking the board with their hand.  The kids got to take their board home too.

Here’s a few pictures from a karate birthday party that we went to in June.  I can’t find my photos from the first party but when I do, I’ll be sure to post some of those pictures too.

They had to wrestle the block out of the other person’s hands. 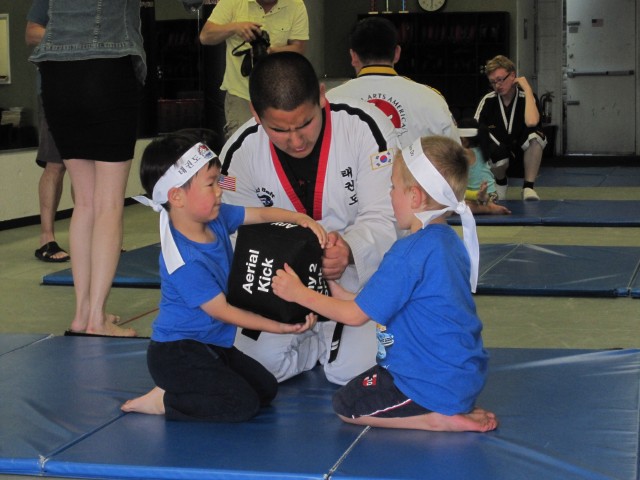 Rebekah wanted to get in on the fun too.

Micah with the board he broke.  He kicked it and it broke into three pieces.

One thought on “Karate Birthday Parties”

Keto friendly Mickey waffles. Thanks Jason for brunch! It was yummy! @birchbenders
Facebook memories reminded me that 11 years ago today I posted, “need to eat in more and eat out less.” Definitely eating in more these days! Thankful for simple recipes and having all of the ingredients at home. // Lemon garlic baked drumsticks 🍋🧄🍗
Recess! Thank you @alesaquock and @jeffquock for this gift that keeps on giving!
Wrapping up their math unit with tie dye Friday! Thank you @barraganmichelle for the picture! #3rdgraderocks
Began Read Across America Week with Dress Silly Day (2 different shoes!) and ended it with Pajama Day! #3rdgrade #readacrossamericaweek
The after-storytime lunch crew! 🥰 @lakechabotpm @usbornestorytime